Reflecting on the School Year

As my students took their second NWEA test of the week today, I watched and thought. I looked at each one and brought myself back to the beginning of the school year when they first entered my room. I teach fifth grade, but they were still fourth graders that warm August day. I don't feel as though fifth graders are true fifth graders until around October when they have adapted to the routine, expectations, and workload.

The first time we give the NWEA is the second week of school. This test allows me to see where the students are academically and how much they have lost over the summer. I don't like standardized tests but I like this one for two reasons. First, it is pretty accurate. It gives a true reading as to where a child is. Second, I have the scores immediately. I can see where their exact weaknesses are and alter my plans to help fix that.

But at the beginning of the year, these new students don't know my philosophy about school so they tend to put forth little effort, and I really have no idea what their true ability is.

As the days turn into weeks, and the weeks into months my students understand what I expect. It has nothing to do with grades but the effort that is put in. My saying becomes our saying: Always give 150%.

I firmly believe that if I instill this in my students, they will take this with them into middle school and life. I often give "talks" when I start to see the effort sway. And I am usually fired up about it. These talks always come back to my school experience as a struggling student. I did the best I could and ended up with C's. My parents were never upset because they knew I was giving it all I had.

That is all I want as a teacher. I don't care about the grade or score, just the amount of effort that is put in.

So today, as I watched my fifth graders put forth more effort into this test than I have seen  them give this school year, I thought about all the success we had in the classroom.

Here are a few of my favorites...

Sacred Writing Time: This has changed my teaching. It took months for my students to trust the process and understand that I just wanted them to write. It was here where they found a safe place as writers. A place where they could experiment with grammar, punctuation and style. Sacred Writing Time created a community of writers within the four walls of my classroom. It was my absolute favorite time of day and one where my students found their voice. I turned reluctant writers into students who love to write.

Tell the Teacher: This was one of our Sacred Writing Time topics and it turned into a weekly occurrence. The students would write down one thing they wished I knew on an index card. Some were random things and others a little more serious. It opened up a door for conversation and allowed me a peak into their lives.

No Assigned Seats: I student taught in a fifth grade classroom and my cooperating teacher did not assign seats. I was fascinated by this model but couldn't figure out how to make it work for me. I still didn't know how it was going to look on the first day of school but I enlisted my students' help and we made it work for us. Each Friday the students would choose a new seat to sit in for the following week. The conditions were you had to choose a seat at a completely different table than you were previously at and you had to sit by people you didn't know. Then each Monday we would spend a few minutes talking to our new friends. It ended up building a great classroom community. One I wasn't expecting.

The Pequot War: I teach social studies to all three sections of fifth grade. We spend two days talking about King Philip's War and the Pequot War. For the lesson on the Pequot War we watch a reenactment video and it really stirs up a lot of emotions. The students' empathy really shines through, and they begin to question whether or not our country was founded in an honest way. After showing the video to my homeroom, one boy was so upset and crying so hard, I couldn't understand him. I pulled him into the hallway and asked why he was so upset. He said, "Why did the English do that to the Pequot? It was so horrible." You can't teach empathy. You can just create lessons that you hope will help it show through.

Slice of Life Challenge: I had 15 out of 27 students write for 25 days or more during the Slice of Life Challenge in March. And the best part about it was they wrote at home. In a notebook. I loved listening to what they wrote about the night before as I checked them in each morning. I introduced challenges from blog posts I had commented on and shared my own writing from the challenge.I was grateful that at this time in the year the students were not afraid to try the challenge and be okay with it if it didn't work out. I was also grateful that so many joined me for it.

Today as I watched my fifth graders take their second NWEA test of the week, I realized they are prepared to be successful in sixth grade. They will be okay without me, and they are ready. Ready to move on.

I just don't think I am ready to give them up yet.

Eighteen Years and Some Change

Right before Mother's Day in May of 1998, my mother was saying good-bye to her children. She had been diagnosed with ovarian cancer years before and the cancer, once gone, had returned and wasn't looking back. I remember being in her room at U of M as she told me she loved me. She barely spoke above a whisper for she didn't have the strength. I thought that was the last time I was going to see her alive.

But the next day when I arrived at the hospital, she was up, walking around, and full of energy. We talked, and apparently, she wasn't ready to go yet. That was my mom. Always determined and did things her way.

My mother didn't have the greatest childhood. She was the youngest of three girls born to Italian parents. Her sisters were a bit older than her. She didn't grow up with a lot of toys and when people did try to give things to her, my grandmother would donate them to the poor. I think this kind of upbringing shaped the woman she was and the kind of mother she would become.

She went to college and became a social work and later a teacher.

She married my father in 1968, she proposed, and had her first child in 1969. Four years later, I was born and not far after that, my youngest sister. She was a stay at home mom until I was about six or seven, when she decided she was going to go to law school. I have memories of her studying at night for the bar exam and remember the day she passed it.

She studied law for quite a while and when we moved to Ann Arbor, she obtained her realtor's license. She worked as a real estate agent until she decided she wanted to own her own company. She started a title company and used her realtor and lawyer expertise to get her feet off the ground. She was good at it. I worked for her one summer and remember her "training" me. It was her way or the highway. She was a hard worker and did things thorough and well. If you weren't going to do it the way she wanted,  you weren't going to do it.

I was in college when she sat my younger sister and me down to tell us of the cancer. We were in the living room sitting on the brown couch that we had at the time. It didn't phase me.

Yes, it was cancer, but cancer didn't know my mother.

She was going to win this fight.

Soon after she came home from the hospital in May of 1998, I realized that this strong and courageous woman was losing the battle. It was the first time that I believed there was something out there stronger than she was.

According to my father, on the night of June 5, 1998, my beautiful mother told him that Sally, her older sister, her mother, and father were there for her and she was ready to go. He told her he loved her and she him.

She gently closed her eyes and went with her family, all of whom had passed away many years earlier.

I don't know why, but I find comfort in that story. It tells me that she was reunited with those she loved well before me.

So on the eve of this Mother's Day, I want to say thank you to a woman who was gone too soon.

Thank you Mom for teaching me how to be kind, strong-willed, independent, and determined through the way you lived your life.

I will forever miss you. 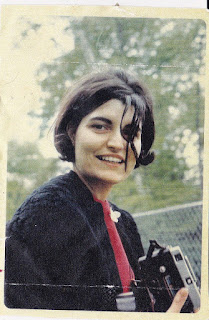